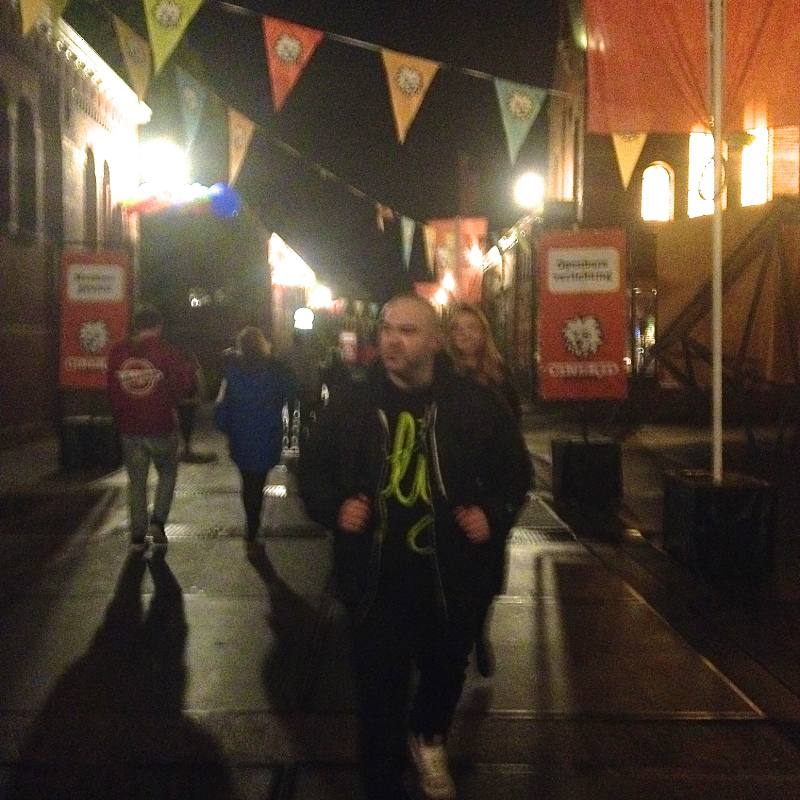 We decided ADE was the best occasion to launch our website and we took our chances.
Tadaaaam – the 15th of October TechnoBabes.net was born! So we went to Amsterdam to present our project to the world.

When you arrive to Amsterdam during the Amsterdam Dance Event, the subject of every discussion is about which party or venue we prefered, which artist we enjoyed the most…

Amsterdam dance event is definitely the best moment to discover Amsterdam if you like to party. After everything we lived, it was difficult to start school the following Monday to be honest. Really difficult!
We had so much fun in Amsterdam that it worth the 3 next days trying to recover!
We keep in mind so many good memories and met so many beautiful people. For sure next year we will visit Amsterdam during the Amsterdam Dance Event 2015.

This is how Resident Advisor presents it:
Amsterdam Dance Event is one of the dance music world’s key industry get-togethers. The festival, which is celebrating its 19th year in 2014, brings together music lovers and industry professionals to the Netherlands for a five-day run of club shows, panel discussions and business meetings. ADE attracts 300,000 festival visitors to Amsterdam each year, with more than 2,000 DJs performing at the city’s clubs.

HOW TO BE TOO COOL FOR SCHOOL IN AMSTERDAM:

We will always remember our first steps in Amsterdam. Walking trough the city center, it was like if everybody was in the city; even the sun was shining above our head. We never saw a city boiling so much before. The subject of every discussion was about which parties to go, which artists to see. Glasses on every eyes, black outfit, and sometimes ADE official pass around necks… you were able to feel the music lifestyle while techno people were passing by. During ADE, techno is alive and everywhere!

Basically, we spent the first hours of our journey discovering the city. Nieuwmarkt, Dam Square, and one of the most famous coffee shops named Green House. Organic love. Check out their collection of picture with the celebrities who went there.

When the night came out, we decided to go to the Fuse x Karton ADE showcase party.
Fuse is famous because it took Sunday clubbing in London to another level and it became an institution in Ibiza too few years later.
Everybody was enjoying the music so much, singing and dancing. We had the pleasure to hear Onur Özer for our very first time; he was definitely the man of the night! This Turkish Dj is playing since 2005 in the most important clubs of the world and if you have the opportunity to see him, please take it! Minimal psychedelic techno… Everything we like!

Can someone explain us how to walk in this city? Bikes everywhere, cars, trams… such a challenge!

After a long brunch time, tasting delicious traditional apple pies and big coffees, we started to put our TechnoBabes stickers everywhere to find our way back home. Amsterdam is quite confusing with all rivers and bridges and rivers and more rivers. The only thing we always find directly is the way to the party! That’s our job man!

By the way, if you find one of our sticker somewhere in Europe… #TechnoBabes ! This will always means that you are close to the best party in town.

Of course we took a walk in the Red District and it has nothing to compare with what we thought it would looks like… more old ladies than expected! We went in Amsterdam with biases and we have to admit that this district is quite amazing during the evening. We passed by the Red Bull Studios Playrooms and the Kompakt Pop-up Store – super cool warm-up!

Let there be Light…

Here we were, at the exclusive worldwide Dubfire: live Hybrid show. Hybrid is a new kind of event that compiles elements of 2D and 3D animation, live audio and lightings.

We listened – or should we say, “saw”- grammy-winning recording artist Dubfire, Modular Pursuits aka Carl Craig, a Detroit techno producer, and The Hacker who comes from the early French Touch movement… No more words. This was the night of the true techno legends!

No more anti-stress cigarettes to light, the show was amazing! Even Seth Troxler was dancing crazy in the middle of the crowd! Did you saw him?

What a pleasure to see glitch effects everywhere but next time don’t hide the DJ behind panels… we want to see him sweat!

Finally, the music of Carlo Lio made us dance again. We heard if dance music is a language, then Carlo Lio is the spokesperson of the most exciting musical movement and we totally agree!

Do you really think we went back home to sleep then? If “yes” is your answer that means you still have a lot to learn about us!

So, last but not least, SCI+TEC’s Carlo Lio took us under his wings and bring us for the 2 last hours of the Awakening show where he played on the Sunday 19th of October. It was only two hours of show but the Joseph Capriati closing was the most minds blasting huge show we attend to!

Where to find energy

After a long walk from Gashouder, which used to host Awakening, to our cute Airbnb apartment located near to Centraal, we made a super TechnoBabes special thirty-minutes nap. Friends from Ibiza and Barcelona arrived at our place and we decided that the sun was too high in the sky to go to bed.

Our secret to keep on going? Find the best Vietnamese restaurant to provide you summer rolls, the right Bo Bun and a coffee coming from space to give you a lot of energy. This is the best after-party lunch we can recommend you.

TechnoBabes never stop! We followed friends to assist to the Resident Advisor ORIGINS Film Premier with Black Coffee at the SONOS studio in the Mayer Manor. What a beautiful place! For the latest edition of their film series with SONOS Resident Advisor made us travelled to South Africa to hear how a national icon was made. This was the most inspiring moment of our ADE experience.

We already knew Hyte from its residency in Barcelona as we spent an every-Thursday last summer season with them but this event went definitely above our expectations.

Fumiya Tanaka, Zip, Raresh, Ricardo Villalobos, Steve Rachmad, Makcim, Terje Bakke and Carlos Valdes… the Line up was perfect and it was such a pleasure to see again every missing faces of our Barcelona crew. Even our dear Ilya was there to dance with all of us and celebrate with champagne and hearts.

We also heard from a Villalobos expert that this set was one of his best!

Hyte, as usual, you took properly care of us and made our night very special.

After party, Hyte after party? Who said after party?
Let’s jump in a taxi and follow the crazy dancer team until the Hyte Warehouse official after party. It was a place like nowhere, with good vibes and the music was so great too. Wait a second! Is Onur Ozer playing?!
To see what a Hyte after looks like: http://on.fb.me/1z3Vpju

We already knew that Fact don’t make fun with party organization but this time was impressive. The major part of us had to take the boat to go there. The wind blowing in your head to refresh ideas before being in the middle of basses was the best to receive at the moment.

From tents to tents, people were dancing the whole day, they didn’t stop to enjoy and we are still crying that the time goes by so fast.
Our Favorite tent was Mystic Garden Room: Rick Maia, Stefano Noferini, Hobo, Anja Schneider; a very good job made from the association of Fact and Deeperfect. Well-done guys!

Suddenly, a proposal changes the progress of our perfect planned agenda:
“Would you like to follow us to the Studio 80 where I have to see one of my artist playing?” To be clear, it would be unnatural for TechnoBabes to answer no to this type of marvelous question.
We really enjoyed the time spent following the Fabulous Band through Amsterdam and the moment we had at Studio 80. The studio 80 was hosting the Watergate party and we had the time to enjoy both the music of La Fleur and to dance a lot with Keinemusik. The club is really stylish, obscure, with good lightings, artists are close to the public and barmen are fast. This club could be one of our favorites if they had talked with air-conditioning professionals before. If you want to enjoy, better opted for a light hold!

Finally, we came back to the Dockyard official After Party to hear real dark techno and when we came back, the music was as insane as expected. There, we discover our new favorite after party DJs Natch! & Dothen coming from Florence in Italia. They found the best way to switch to the next song, fabulous! This after party was really great but please more lights, we know that you like darkness but we want to see our DJs!