HOW TO BE TOO COOL FOR SCHOOL IN MILAN:

Celebrate your birthday with champagne

A PARTY WEEKEND IN MILAN:

The shorter the trip is, the less we sleep – no news.
We were amazed how cool Milan is in terms of partying.

If you plan to go to Milan for a party weekend, get ready to try 100 different kinds of Pizza within the next days.
Pizza with Burrata, Pizza Napoletana, Pizzeta and other kinds that even Italians can’t remember the names of.

But this and all the magic will happen if and only if you have TechnoTrip guides, and we had perfect ones!

Milan was a perfect occasion for the blondies to get together and celebrate Eva’s birthday.
We started our weekend with a quick visit to the city center, passing by the Cathedral Duomo di Milano, the hip part of town with second hands shops and boutiques, the coolest vinyl shop ever called Serendeepity and a few roman remains.
If you have the time, make a stop at Monza, a super cute village close to Milano full of “Rich Bitch” shops and unforgettable restaurants just like Trattoria Caprese.

The Spanish would say Postureo, The French would say Chic and we still don’t know how to say it in Italian but if you like classy venues you should definitely have a drink at TOMs. It is definitely worth a visit, just because of their stamp “TOM THINKS YOU ARE HOT” in your wrist and the second floor. Really heavy cool curtains lead you to a dark hidden room with great music. 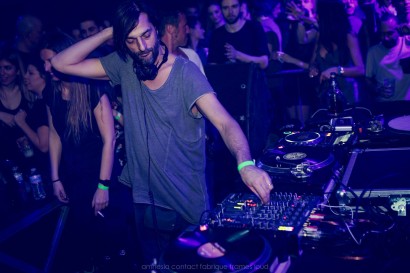 Well, this is what we experienced:

After having celebrated Eva’s birthday with French champagne we quickly changed to glitter and glamour and the party tour had begun.
We had a great dinner with the Italian team at a place called Dal Ponte. Pizzas to share, delicious fish choosen by our hosts, Gelber Muskateller and a lot of laughs later, it was already time to head towards Fabrique Milano. We didn’t want to miss our friend Sbri from Loud Barcelona playing back to back with Gueves.

Not one minute after arriving at the venue we already had our magic bracelets for the biggest backstage area ever. Perfect!

After Sbri & Gueves, Sonja Moonear prepared Ricardo Villalobos show. She made the 4000 guests and party people dance at this huge venue.

When Ricardo Villalobos entered and started to play the first vinyl, people just freaked out. As did we! We were expecting him a bit too fucked up as he used to be but those times but not this one! Lucky girls – he played super great!

Villalobos is one of the Djs (like Nina kraviz) who has his own dancing moves:

The last song he played was mind blasting: it was a kind of song with African influences and Italian lyrics –we are still discussing about it. The people left and we went to sleep…

Nope!
Of course we didn’t!
Once again we heard the classic: “After party, after party, who said after party!?” during this moment everybody is figuring out what’s the next plan.

That’s how we arrived at a place we will never ever find again. Sbri played a second time to open the after party and the penthouse was big enough for 200 people so we danced until the sunrise and even longer. It was a big house hidden in the suburbs of Milan and the only thing that made us belive it was not a dream was the horrible, long and rainy way back home.

The following day, or should we say the same day, after a well-deserved power nap, we went to dinner again. “Pizza, Pasta and Amore” – And the fantastic burrata coming directly from an other galaxy.

We’ve been to Frames party for the last night out of our trip to Milano.

Frames Milan is every Saturdays in a small club but it’s definitely an insiders’ tip!

“My favourite party in Milan? This one of course!” people said around us.
Italians don’t speak a lot, they just like to dance to really feel the vibe.

Our host Pabie and Sammy Dee in the DJ booth once again made this night unforgettable. We really had so much fun there!

Our trip to Milan was a great opportunity to meet amazing people, see friends, have great food and especially experiencing the Milan nightlife!
We would like to thank everybody for this amazing trip!
Ciao ciao

Ps 1: Don’t forget to buy a bottle of Montenegro or Frangelico at the airport.

Ps 2: One word to remind in Italian: festa